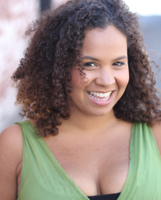 Kathryn is a singer, actor, voice over actor and puppeteer.  She’s performed all over North America and Europe as both a musical theater performer and as a classically trained soprano.  Katie returned to the stage post pandemic with the off broadway show Rescue Rue performing and puppeteering the role of Ms. Gladys, a kooky fairy Dog Mother.   Kathryn spent four years with the national tour of The Phantom of the Opera as an Ensemble member and Carlotta cover, having performed the role of the opera diva over 90 times.  Kathryn was featured in Encores! The NewYorkers, the reconstructed Cole Porter musical.  Kathryn loves new works and is an avid sight reader and has performed in several readings of new musicals.  She also is a founding member of the “All’s Well Sisters” a Boswell Sisters inspired Jazz Trio.  She was the 2019 Musical Theater winner of the American Traditions Vocal Competition as well as a Regional Met Competition finalist.   You can find her every Sunday at All Souls Universalist Unitarian Church on the upper east side as a section leader and soprano soloist.

Kathryn holds a BA in music from the College of Wooster, where she got her start in classical solo voice, studying with Jim Mismas and singing with the Wooster Chorus under the direction of John Russell. Kathryn also holds a Masters of Music from THE Ohio State University, where she studied with Dr. Robin Rice. She also studied voice at the University of Missouri Kansas City Conservatory with Dr. Rebecca Sherburn, who incidentally was also Carlotta in the European tour of The Phantom of the Opera.